What is RYK ransomware? And how does it implement its attack?

RYK ransomware is a data-encrypting malware designed to make files inaccessible to users. It is a new variant of Ryuk ransomware. It uses the .RYK extension in marking the files it encrypts, hence the name RYK ransomware. The instant its malicious payload is loaded into the system, it starts to implement a series of modifications. It starts by connecting the targeted system to a remote C&C server controlled by the attackers. From this remote server, RYK ransomware downloads its other components and puts them on several system folders in order to repress or launch system processes which allow it to implement its attack effectively. 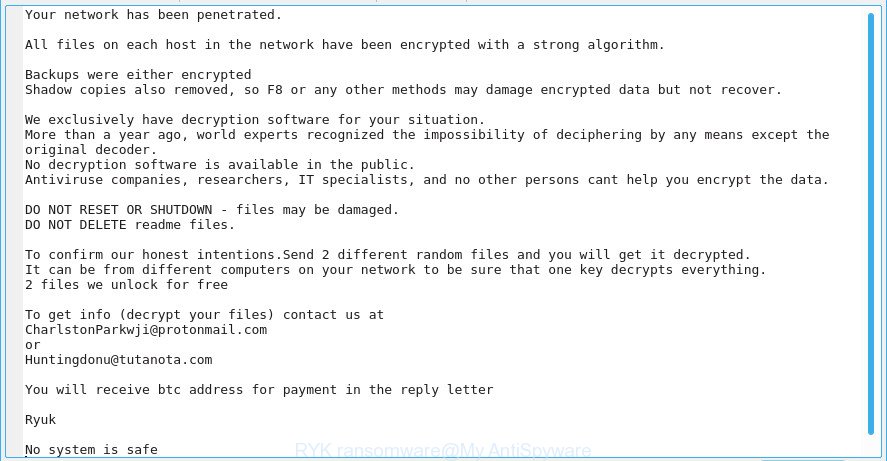 RYK ransomware also makes alterations in some of the registry keys and sub-keys like Run and RunOnce. This allows the crypto-virus to execute its attack automatically every time a victim starts the computer. It also scans the system for security and antivirus programs that might interfere with its attack and disables or removes them. It then scans the computer for files with the following extensions:

Once it finds its targeted files, RYK ransomware encrypts them using a sophisticated encryption algorithm. Following file encryption, it appends the .RYK suffix to every compromised file and releases a file named “RyukReadMe.txt” which contains the following content:

“Your network has been penetrated.
All files on each host in the network have been encrypted with a strong algorithm.
Backups were either encrypted
Shadow copies are also removed, so F8 or any other methods may damage encrypted data but not recover.
We exclusively have decryption software for your situation.
More than a year ago, world experts recognized the impossibility of deciphering by any means except the original decoder.
No decryption software is available to the public.
Antivirus companies, researchers, IT specialists, and no other persons can help you encrypt the data.
DO NOT RESET OR SHUTDOWN – files may be damaged.
DO NOT DELETE readme files.
To confirm our honest intentions. Send 2 different random files and you will get it decrypted.
It can be from different computers on your network to be sure that one key decrypts everything.
2 files we unlock for free
To get info (decrypt your files) contact us at
[email protected]
or
[email protected]
You will receive BTC address for the payment in the reply letter
Ryuk
No system is safe”

How does RYK ransomware spread over the web?

RYK ransomware spreads over the web in a file named TQNIAe.exe which is distributed using several methods. It could be disguised as an installer of some program or it could be attached to emails. This is why you have to be extra cautious in what you download online as it could result in your computer getting infected with nasty cyber threats like RYK ransomware.

Be sure to follow the removal guide given below to successfully obliterate RYK ransomware from your computer.

Step_2: Under the Task Manager, go to the Processes tab and look for the process named TQNIAe.exe as well as another suspicious-looking process that takes up most of your CPU’s resources and is most likely related to RYK ransomware.

Step_3: After that, close the Task Manager.

Step_5: Under the list of installed programs, look for RYK ransomware or anything similar, and then uninstall it.

Step_7: Navigate to the following locations below and look for RYK ransomware’s malicious components such as TQNIAe.exe, RyukReadMe.txt, [random].exe, and other suspicious files, then delete all of them.

Step_9: Tap Win + R to open Run and then type in Regedit in the field and tap enter to pull up Windows Registry.

Step_10: Navigate to the following path:

Step_12: Close the Registry Editor and empty the Recycle Bin.

Restoring your encrypted files using Windows Previous Versions feature will only be effective if RYK ransomware hasn’t deleted the shadow copies of your files. But still, this is one of the best and free methods there is, so it’s definitely worth a shot.

Congratulations, you have just removed RYK Ransomware in Windows 10 all by yourself. If you would like to read more helpful articles and tips about various software and hardware visit fixmypcfree.com daily.

Now that’s how you remove RYK Ransomware in Windows 10 on a computer. On the other hand, if your computer is going through some system-related issues that have to get fixed, there is a one-click solution known as Restoro you could check out to resolve them.