What is Birbware ransomware? And how does it carry out its attack?

Birbware Ransomware is a cryptovirus discovered by malware experts in the middle of October 2018. This crypto-malware uses the .birbb extension in marking its encrypted files. Once it infiltrates a targeted machine, it drops its malicious payload in the system and begins to carry out its attack. It downloads and creates more malicious files in the system and uses them in the execution of some malicious commands. 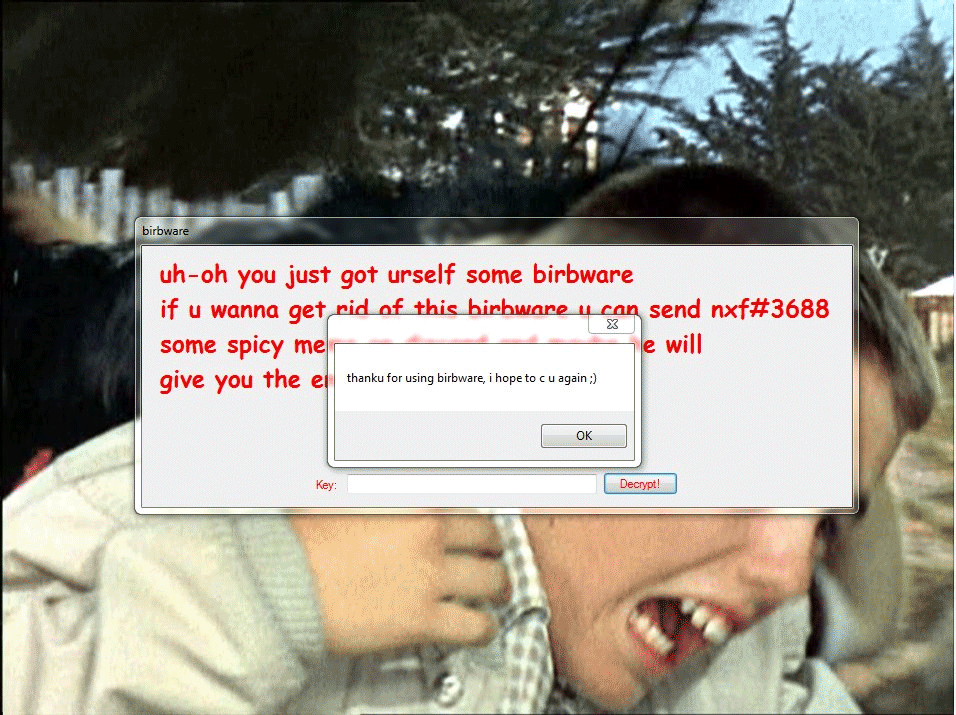 According to security experts, Birbware ransomware reads data, saves the content in the system memory, and deletes the original data container. It then scans the computer for files with the following extensions:

Once it finds its targeted files, it encrypts them using AES 256 encryption algorithm and appends the .birbb extension to every affected file. The decryption procedure is said to lack verification. Following data encryption, Birbware ransomware changes the desktop background image to a depiction of a crow attacking a small boy as well as display a small program window that contains the following text:

How is the malicious payload of Birbware ransomware disseminated over the web?

Eliminate Birbware ransomware with the help of the removal instructions given below.

Step_1: Close the program window of Birbware ransomware and if you can’t close it, tap Ctrl + Shift + Esc keys to launch the Task Manager.

Step_2: Go to Processes and look for the malicious processes of Birbware ransomware then right-click on it and select End Process or End Task.

Step_4: Look for dubious programs that might be related to Birbware ransomware and then Uninstall it/them.

Step_6: After opening File Explorer, navigate to the following directories below and look for Birbware ransomware’s malicious components like TOTALLYLEGIT.exe and other suspicious-looking files and then erase them all.

Before you proceed to the next steps below, make sure that you are tech-savvy enough to the point where you know exactly how to use and navigate your computer’s Registry. Keep in mind that any changes you make will highly impact your computer. To save you trouble and time, you can just use Restoro, this system tool is proven to be safe and excellent enough that hackers won’t be able to hack into it. But if you can manage Windows Registry well, then, by all means, go on to the next steps.

Step_9: Navigate to the listed paths below and look for the registry keys and sub-keys created by Birbware ransomware.

Restoring your encrypted files using Windows Previous Versions feature will only be effective if Birbware ransomware hasn’t deleted the shadow copies of your files. But still, this is one of the best and free methods there is, so it’s definitely worth a shot.

Congratulations, you have just removed Birbware Ransomware in Windows 10 all by yourself. If you would like to read more helpful articles and tips about various software and hardware visit fixmypcfree.com daily.

Now that’s how you remove Birbware Ransomware in Windows 10 on a computer. On the other hand, if your computer is going through some system-related issues that have to get fixed, there is a one-click solution known as Restoro you could check out to resolve them.

Copyright © 2023, FixMyPcFree. All Rights Reserved Trademarks: Microsoft Windows logos are registered trademarks of Microsoft. Disclaimer: FixMyPcFree.com is not affiliated with Microsoft, nor claim direct affiliation. The information on this page is provided for information purposes only.