What is Cryptre ransomware? And how does it carry out its attack?

Cryptre ransomware is a file-encrypting virus designed to lock important data in an infected computer. It is a new variant of CryptoWire ransomware. It uses the .encrypted extension in marking its encrypted files. Aside from encrypting files, it also has a lock-screen component which means that not only can it lock files but it can also lock the computer itself. 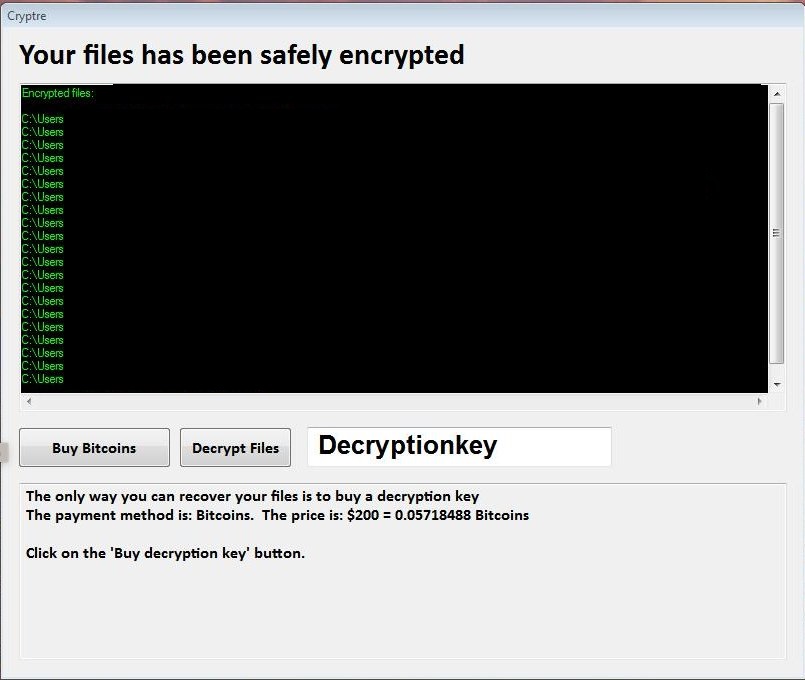 Once it infiltrates a computer, it drops its payload file which contains the following parameters:

After its malicious payload is executed, it connects the infected computer to a remote Command and Control server controlled by the attackers. From this remote server, Cryptre ransomware downloads its malicious components which will be placed in the system folders in order to launch and repress system processes. It also modifies some of the registry entries and keys in the Windows Registry to allow it to run automatically in every system startup. It then begins encrypting files using the AES 256 encryption algorithm. After the encryption, it appends the .encrypted extension to each one of the compromised files and locks the computer. The locked screen contains the following message:

“Your files have been safely encrypted
The only way you can recover your files is to buy a decryption key
The payment method is Bitcoins. The price is: $200 = 0.06023569 Bitcoins
Click on the ‘Buy decryption key’ button.”

Moreover, Cryptre ransomware also removes the shadow copies of the encrypted files and disables repair features of Windows during the boot phase using the following commands:

How is the malicious payload of Cryptre ransomware distributed?

Wipeout Cryptre ransomware from your computer by following the removal instructions laid out below.

Step_1: Tap the Ctrl + Alt + Delete keys at the same time to open a menu and then expand the Shutdown options which are right next to the power button.

Step_2: After that, tap and hold the Shift key and then click on Restart.

Step_3: And in the Troubleshoot menu that opens, click on the Advanced options and then go to the Startup settings.

Step_5: After your PC has successfully rebooted, tap Ctrl + Shift + Esc to open the Task Manager.

Step_6: Go to the Processes tab and look for the process named “Windows update.exe” as well as any other suspicious-looking processes that could be related to Cryptre ransomware and then end their processes.

Step_7: Exit the Task Manager and open the Programs and Features section under Control Panel by pressing the Windows key + R, then type in appwiz.cpl and then click OK or press Enter.

Step_8: Look for any suspicious-looking programs that could be related to Cryptre ransomware and then uninstall it.

Step_10: Now navigate to the following locations and look for the malicious components created by Cryptre ransomware like Windows update.exe and [random].exe and then make sure to delete them all.

Before you proceed to the next steps below, make sure that you are tech-savvy enough to the point where you know exactly how to use and navigate your computer’s Registry. Keep in mind that any changes you make will highly impact your computer. To save you the trouble and time, you can just use Restoro this system tool is proven to be safe and excellent enough that hackers won’t be able to hack into it. But if you can manage Windows Registry well, then by all means go on to the next steps.

Step_12: Tap Win + R to open Run and then type in Regedit in the field and tap enter to pull up Windows Registry.

Step_13: Navigate to the listed paths below and look for the registry keys and sub-keys created by Cryptre ransomware.

Step_15: Close the Registry Editor and empty your Recycle Bin.

Restoring your encrypted files using Windows Previous Versions feature will only be effective if Cryptre ransomware hasn’t deleted the shadow copies of your files. But still, this is one of the best and free methods there is, so it’s definitely worth a shot.

Congratulations, you have just removed Cryptre Ransomware in Windows 10 all by yourself. If you would like to read more helpful articles and tips about various software and hardware visit fixmypcfree.com daily.

Now that’s how you remove Cryptre Ransomware in Windows 10 on a computer. On the other hand, if your computer is going through some system-related issues that have to get fixed, there is a one-click solution known as Restoro you could check out to resolve them.